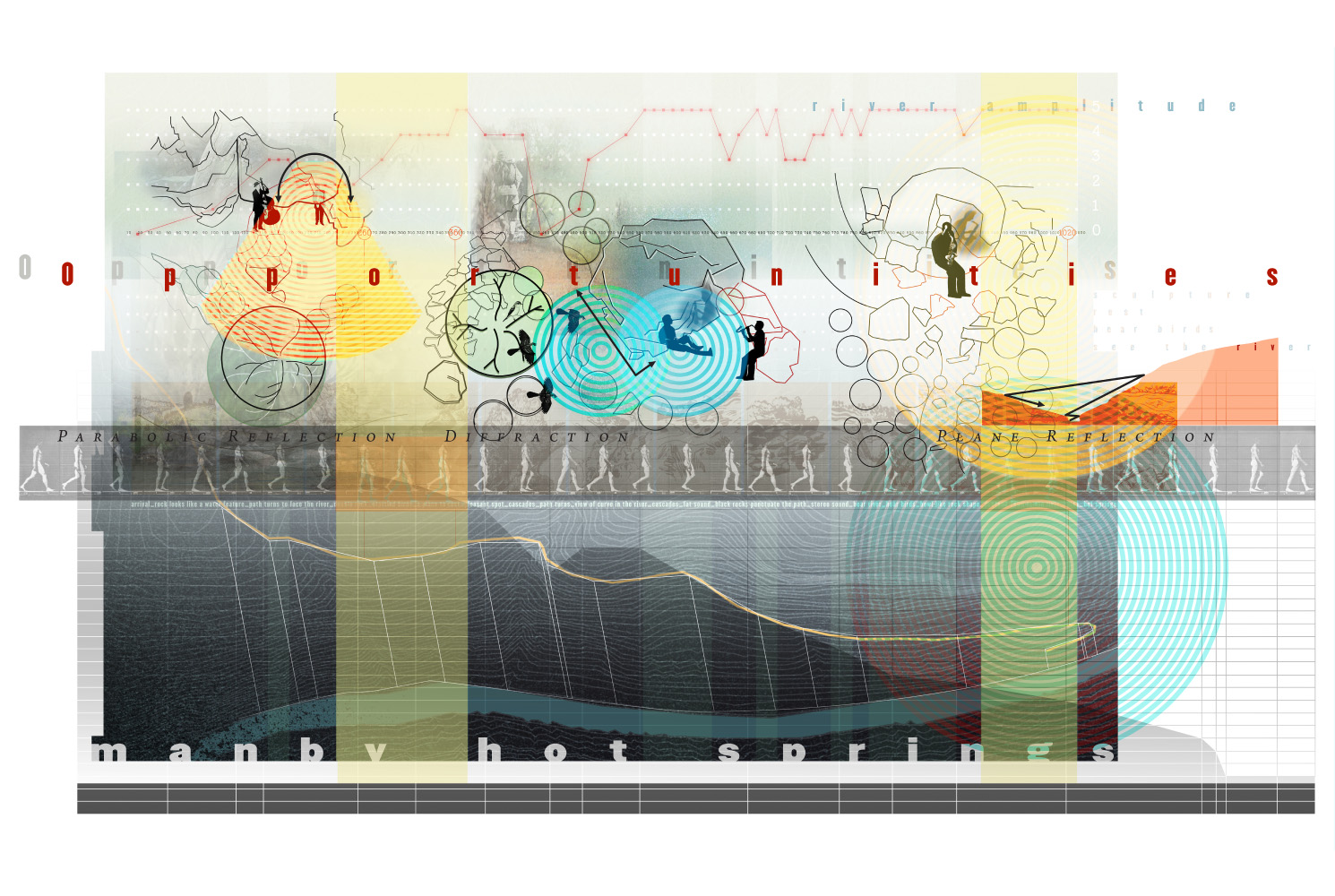 I had the opportunity to visit Cape Hatteras NC to see the Hatteras lighthouse. The lighthouse was located right on the beach and due to erosion it was going to be moved 2000 feet inland the following year. I was standing on a sand dune 20 feet above the beach and the sun was setting. It was a summer evening and the sky had a pinkish cast. The beach was a warm taupe color. Below there was a man steadily walking along the shore playing the bagpipes. I looked up and at the very top of the lighthouse was a prehistoric looking bird, called a “Frigate”. It was a little far north of home and it is known to circle the tops of lighthouses. The moment was ethereal. I knew that I would never see this again. How often do you see people playing the bagpipes on the beach? The mixing of music, water and place was moving and the inspiration for my path design. I set out to design a path that was artful and experience oriented.

To understand the path to Manby Hot Springs, I walked the path noting every 10 paces when I saw an opportunity to see the river, hear the river, saw a place for sculpture, or locate a bench.Then I noted the amplitude of the river sounds on a scale of 1-5. There were correlations between the rock shapes and the increased amplitude. I started thinking about sound and art and designing resonance chambers. I designed the path for a musician to interact with the canyon walls, water, birds. Each location has has a distinct sound quality. The first is a carved out nook, shaped much like a car head lamp or parabolic shape, a small space to perform. The middle location is a communal resting spot , a place to hear music and birds.   The last is a rocky perch for the musician to play. As the sun sets the cool air sinks allowing the sound to settle down along the canyon walls closer to the audience near the  hot springs. As the musician makes his way to the hot springs, he finds a place to tuck his instrument in a rocky shelter beneath the seat to retrieve when he returns. The hot springs are located north of Taos, west of the town of Arroyo Hondo. It is about a 15-20 minute walk off a dirt road. Three shallow sand-bottomed rock pools on the east bank of the Rio Grande are usually about 97 F depending on the time of year.Instructors: Tony Mazzeo, Leila Tolderlund, Kathy Kambic